Being able to write their name is a source of pride for all young children. It is this special word that helps children understand that words hold meaning. It is this special word that also helps them to understand the difference between pictures and words. In the drawing below, Ruby, only 2 years and 10 months, shows that she knows the difference between her self-portrait and her name in the top right hand corner. While there are no discernible letters yet, the zig zags show that she knows how we represent words in English.

Ruby has demonstrated ‘a notable and quite specific cognitive achievement – the idea that a mark can represent a particular linguistic unit’ (Read, 2009, p.261).

In the following picture we see that Krisha can write her name in upper case letters, while Brooke has combined upper and lower case letters. Krisha and Brooke were both in pre-school when they proudly demonstrated that they could already write their names. 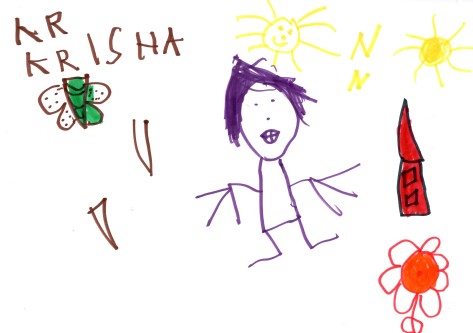 When children first learn to write their names, it is more a process of copying or drawing letter shapes than spelling the word. As a consequence children sometimes recognise their names based on the first letter on their name (rather than the whole word) – consider the following scenario:

“A new student, Peter, age 5 years, had joined a kindergarten class (in a NSW school) early in the school year and the teacher was introducing Peter to the class. As part of the introduction she wrote Peter’s name on the board. Patrick became upset, and exclaimed that he thought the ‘P’ at the start meant this word represented his name (‘but that’s mine’ said Patrick). Until this time, there had not been any other children in the class with a name beginning with P. The two names went on the board for all kindergarten children to scrutinise. A close comparison of the two names helped the class see that despite a common first letter, the names were different. Following on from this incident, the teacher collected a number of other children from other classes whose names began with ‘P’ and they came to visit. What had started as the introduction of a new student, led to a series of lessons involving the children in close examination of the letters in names and many other words displayed around the classroom” (Mackenzie, 2019, p. 152).

Upper or lower case? Does it matter?

Most children learn to write their names before they start school – and it is usually a parent who teaches them – often in upper case letters. Perhaps the parent instinctively understands that upper case letters are easier to write, or perhaps they are unsure of the script taught in schools.

Adams, in her seminal work on beginning reading, advised that

“Consider how confusing it must be for a child who has learned his or her name at home or preschool in upper case letters but when starting school is faced with their name written with a capital letter and lower case letters (Mackenzie, 2018). It could also be disappointing for the parent, who thought they were helping by teaching their child how to write their name before starting school, only to find out that they had taught it incorrectly” (Mackenzie, 2019, p.155). Of course it wasn’t incorrect – it just wasn’t in the form that the school preferred of expected. Perhaps we could be more flexible with our expectations.

Consider the visual differences in the representations of the following names:

“It can be helpful to find out how children have been taught to write their names when they are enrolled in school, before creating name labels for desks or bag hooks. Children will feel more confident if they can recognise their name on the first day of school. Once they know the lower case letters they can be taught ‘another way’ of writing their name. At that stage, having two ways to write their name will make them feel extra special” (Mackenzie, 2019, p. 155). (see below – Alex)

Names as a resource for learning about letters

Of course there are many more activities that can involve children’s names. As children become confident at writing their name in both Upper Case and the standard Capital letter and Lower Case  – give them the letters for both. At the appropriate time add the letters for their second name. The more you work with these letters the more comfortable children will become with the letters of their own names but also those children around them. Always use the letter names when talking about letters in children’s names.

I hope the contents of this posting is of interest – there are some more activities on page 155 of Mackenzie 2019 – in reference list.

Have fun – and take advantage of children’s fascination with their own name.

Mackenzie, N. M. (2019). Learning to ‘look at’ and ‘write’ the letters of the alphabet. In L. Beveridge, R. Cox, & S. Feez (Eds.), The alphabetic principle and beyond: a survey of the landscape Newtown: Primary English Teaching Association (PETAA).

My name is Noella Mackenzie and I am an Associate Professor (Adjunct) at Charles Sturt University, Albury-Wodonga Campus in NSW, Australia and a Senior Fellow of the Australian Literacy Educators' of Australia. I also work as an independent education consultant. I am also a daughter, sister, wife, mother and grandmother who loves to read, garden and travel. While my career has always been in education, there have been four distinct phases. The first phase was that of classroom teacher – teaching children from 5-12 years of age in a number of primary schools. The second phase of my career saw me working as a specialist professional development provider working with teachers in early intervention and special education. The third phase had me working as an academic at Charles Sturt University. That role involved me teaching undergraduate and postgraduate students, researching and continuing my work with teachers and parents of young children. The fourth phase sees me working as an independent education consultant, supporting school systems and schools with professional learning input for teachers. I am passionate about teaching and in particular early literacy development. I am proudly the product of public education. I grew up on a farm and went to the local primary and high schools where I was fortunate to have some fabulous teachers. My Diploma of Education (Early Childhood) was earned at the Riverina College of Advanced Education in Wagga Wagga NSW. My Bachelor of Education, Master of Education and Doctor of Education qualifications were all earned at LaTrobe University in Melbourne, Vic and were spread out over a number of years as I studied part time and worked full time. I completed my doctorate in 2004 and started work at CSU in the same year. View more posts